A Simple Method for Determining Ground Reaction Force During Running

The physics of running is typically quite complex. Often a biomechanist will need to be brought in to help accurately assess an athlete’s running technique. However, a new biomechanical model1 may make this process a lot easier, opening up a range of opportunities for sports scientists to gain a deeper understanding of their athletes’ running patterns — potentially improving our ability to flag fatigue and injury risk. So how does the new model work? Firstly, let’s look at the old way of describing the force-time patterns of a human runner. Traditional biomechanical models tend to include complex multi-element spring-mass systems (see Fig 1A) which require equally complex computer simulations to estimate the ground reaction force. Figure 1A clearly shows the intricacy of these traditional models — not to mention that they were originally developed to model rear-foot impacts and so only give rough estimates of force imparted during the entire contact phase1. Traditional models work well in a research setting but tend to be problematic for field-testing because they require expensive equipment, high expertise and a lot of time to analyse the results.

Simple is the key

On the other hand, the new approach developed by Kenneth Clark , Laurence Ryan and Peter Weyand simplifies this process considerably. By analysing the interaction of just the lower portion of the leg that is contacting the ground, and the sum total of the rest of the body, the authors could accurately predict the vertical ground reaction force during the contact phase of each stride.

Fig 1B shows the model with the two-mass elements. During running, these two elements move largely independent of each other during the contact period of the running cycle; thus, knowing these patterns, in combination with some classical physics, allows for an estimation of the force contribution from each element. These can then be combined into a final ground reaction force (Fig 2). 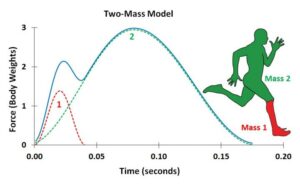 Figure 2: The ground reaction force as modeled by the new “two-mass” system. The dotted lines show the contribution of each mass segment, with the solid line highlighting the sum of the whole body. Image courtesy of Clarke et al 1

While traditional models require complex motion capture equipment, this new method can be implemented with basic technology. As lead author Kenneth Clark explained to Southern Methodist University Research News blog: “our model inputs are limited to contact time on the ground, time in the air, and the motion of the ankle or lower limb. From three basic stride variables, we are able to predict the full pattern of ground-force application”.

The authors show how these models need only three inputs: the velocity of the leg segment, a measurement of the contact time of the foot and a measure of the time in the air of the foot. These can be measured using simple technologies like high-speed cameras with a marker on the ankle, or with very basic motion capture systems. Furthermore, the math and physics are relatively easy to follow and would be reproducible across athletes.

Understanding athletes’ gaits has been of interest to sports scientists for a long time. Measuring gait patterns has an obvious application to coaching: it can be used as a feedback tool to improve performance, compare athletes, or prevent injuries through poor techniques such as asymmetry. Some coaches use gait analysis to provide feedback during gait retraining to reduce load. It can also be used to develop a return to sport protocol for injuries such as ACL reconstruction or concussion.

Traditionally, many of these protocols use more complex models than the “two-mass” model, but the availability of such a simple approach should lead to new applications. Identifying differences between an athlete’s force signals at regular stages during a season could help identify asymmetries or drops in force that could flag fatigue or the early stages of injury.

As discussed by Peter Weyand in the SMU blog: “you could potentially identify the asymmetries of runners with tibial stress fractures, Achilles tendonitis or other injuries by comparing the force patterns of their injured and healthy leg. The waveform patterns might show the athlete continues to run with less force on the injured limb. So, it may offer an inexpensive diagnostic tool that was not previously available.”

What do you do?

Do you use gait analysis at your club? What technologies do you use? Would you potentially use a simple model like this on? We’d love to hear from you! Let us know on twitter and as always, if you have any questions hit us up at support@fusionsport.com! We love analytics here at Fusion Sport. Check out our Smartabase and Smartspeed products to see how we can facilitate successful analytics programs within your organisation.